Today we are going to explore some of the elements of how to play lead guitar in any key, for any song, at any time, for any style of music you desire. The very first thing you need to understand is the basic major scale. This scale is also called the “Ionian Mode”. Anytime you hear someone talk about the the “Ionian Mode”, they are simply talking about the natural major scale.

If you have any sort of training in the past, or any help from friends in the past, I want you to just let it all go for now and give yourself a new slate to work from mentally. Just allow yourself to start from scratch right now, as if you are a brand new guitar player with zero knowledge.

The major scale is made up of 7 notes, and then the octave which is the 8th note. The 8th note is exactly the same as the 1st note only one octave apart from each other. Keep in mind…when I talk about the notes as numbers, I’m talking about the number of notes in the scale, not 8th notes as in written music etc…

Play Lead Guitar In Any Key

Anywhere you start on the neck, and follow this formula, you will be playing the major scale. The key you are playing in is simply determined by the first note that you start on. This holds true for any string or any starting point on the entire fretboard.

This would be an example of playing your major scale in a horizontal position. You should also know how to play the same major in a vertical position as well.

The simplified answer is that horizontal scaling tends to bring out more melodic phrasing within your lead guitar playing, where as vertical scaling tends to allow faster licks and phrasing to easily flow together. That’s not to say that you can’t can’t play lead guitar fast or melodic in both vertical and horizontal positions, it’s just a natural tendency to play melodic in a horizontal scale form, and fast-flowing licks within vertical scale form.

Any Advantage To Play Lead Guitar Horizontally and Vertically?

YES! The secret sauce is to recognize the difference between to the two styles and be able to play both ways in either forms of the scale positions. This takes a bit of time to master, but simply being made aware of this today, has put you miles ahead of the learning curve.

The next example is to play the same major scale in a vertical position. The formula and intervals are exactly the same, but this time you’ll only play 3 notes per string before move down to the next string. 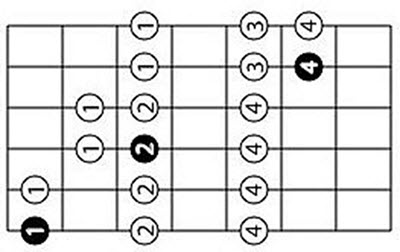 If you counted all of those notes it would be a total of 8 notes, but only the first 7 notes make up the scale, and the 8th not is the octave. In this case the octave would be the 4th string 7th fret.

Since we used the key of “G”, just use this key to get as your starting point. You want to train your ear to hear the scale in the same key over and over, so it becomes very natural sounding. When you do this, it becomes much easier to practice in other keys because your ear will already be “tuned in” to the sound of the major scale.

Would like to know more about improving your Lead Guitar Playing?